It’s a supportive atmosphere, all engines running; a place where you’ll be included to work arm-in-arm with experts from all over the company on a big project one day, and meet the gang for a beer and a joke the next. Hard and smart work is rewarded and recognized, and your life outside of DOWL is acknowledged and important. In the end, few moments are greater than delivering for a client: the team hustle to solve a critical issue, the quality plans delivered ahead of schedule, and the call to let us know that we pulled through when it matters most. The company is us, and we’re the company.

The DOWL Charter guides our culture and acts as a compass when it comes to the quality and value of our work. Can you live the Charter?

Creating a socially and racially just environment where diversity thrives

Thanks to the quality and drive of our people, DOWL is one of the West’s leading planning, surveying, civil/transportation, bridge, construction support, and environmental services firms.

Quality: Following a rigorous audit of the company’s Quality Management System (QMS) by outside consultant British Standards Institute, we are now ISO 9001 certified.

Being ISO 9001 certified means it’s not just us telling you we have a straightforward and codified quality system; we have an outside stamp of approval. We know that long after the project is over, the quality of our product is all that’s left.

Safety: Safety requires diligent attention and feeding. At DOWL, our Risk and Safety Officer works with a group of professionals from every corner of the organization to update our safety program and disseminate safety messages, train staff on safe practices, and check our real-world safety implementation. We are so serious about safety that we don’t mind telling you we’d rather miss your important deadline than risk the safety of our employees.

Diversity: Diversity, equity, and inclusion are responsibilities that we take very seriously, and we delight in celebrating the differences and similarities among us that make us diverse. It’s written in our company charter, but it’s also embodied by our passionate employees who help to positively shape our world. DOWL is dedicated to hiring and supporting a diverse workforce and supporting local organizations that push our society toward racial and social justice.

Sustainability: As a company with West Coast roots, we’re surrounded by nature and it influences our firm culture by attracting individuals who love, respect, and embrace outdoor activities. Because of this, we’re also dedicated to being a sustainable company with a focus on preserving and protecting our natural environment. This means considering our own office practices to be more thoughtful of preserving and protecting our world. As for our projects, we work closely with clients to incorporate green, sustainable, and multi-modal elements into design whenever possible – meeting or exceeding local, state, and federal regulations on every project.

...bridge design or rehabilitation projects completed in the last decade.

... successful and seamless virtual public meetings held during 2020 and 2021.

Where We're Coming From

DOWL’s founders started in a garage in Anchorage, Alaska in 1962. Today, we are a 450-person firm with offices in six states. Together, we are a team that shares similar, interesting stories of humble beginnings, made up of innovative professionals who are eager to tackle the design challenges of our various communities. Click through the timeline and explore the evolution of DOWL. 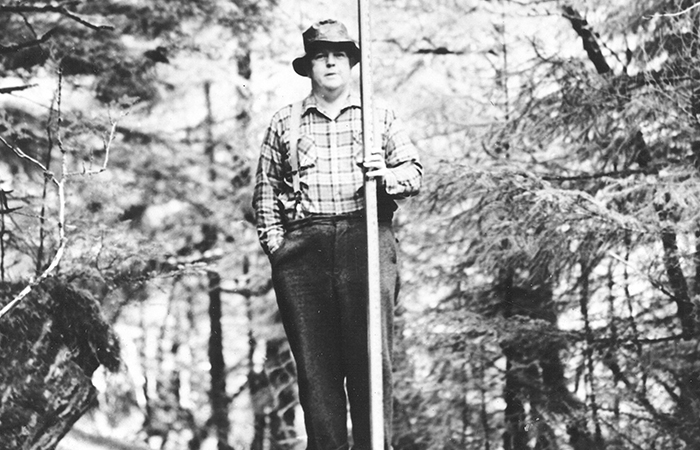 Our Roots Started Before DOWL Began

Even before Alaska became a state and DOWL opened shop, the foundation of our operation was laid. Two firms later purchased by DOWL, Toner-Nordling and Associates, founded in Juneau, Alaska, and HKM Engineering, founded in Billings, Montana, were started in 1945 and 1955, respectively. These are two of DOWL’s anchor offices today and continue under the DOWL moniker, but they have a storied history of their own in communities we love. 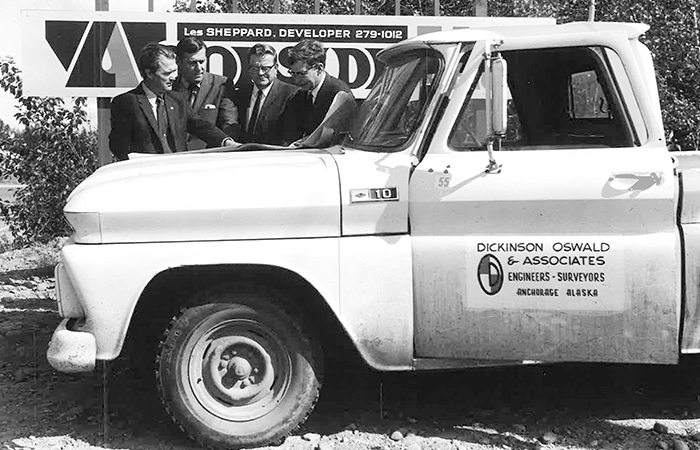 A Genesis in an Alaska Garage and a Big Earthquake

A garage, a PE, and a dream: This is how DOWL was born. We began in a garage as a small, one-man shop named for its founder, Lewis E. Dickinson, Jr., PE, in Anchorage, Alaska, in 1962. Six weeks later, Maurice Oswald (Ozzie) joined the firm to found D&O. The small company had clients and work, but it was the Good Friday earthquake that shook central Alaska and seeded the firm’s backlog that gave rise to the DOWL we know today. Around the same time, another of DOWL’s future partners sprung up in Springfield, Oregon: In 1966, Oregon Bridge Engineering Company (later known as OBEC) was founded as a subsidiary of Hamilton Construction. 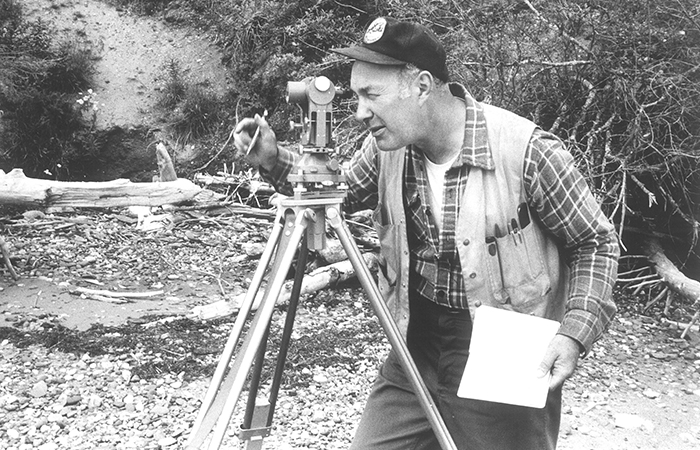 A Pipeline, a Testlab, and a Boom Economy

As the 1970s began, D&O had clearly established itself as a legitimate firm in Anchorage. By 1971, the company had $2 million in revenue and 35 employees. In a few years’ time, Dickinson and Oswald took on two more partners: Ken Walch and Harry Lee. By 1974, the firm was known as DOWL Engineers. That same year, the firm expanded its client base and service lines with the purchase of assets from materials testing company Alaska Testlab. The 1970s would end with a boom for the Alaska economy with the building of the Trans-Alaska Pipeline System. While DOWL Engineers didn’t work directly on the pipeline, the state’s economic engine was fueled, and DOWL benefited from the residual work for developers, municipalities, utilities, and contractors. 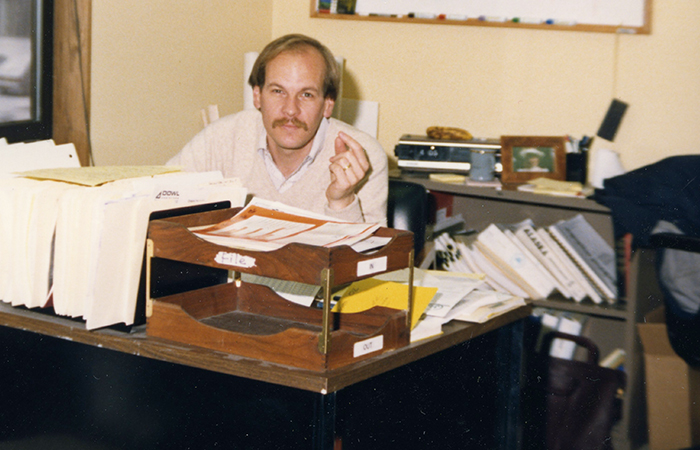 Alaska’s Freefall and DOWL Moves Outside

DOWL continued growing its employees and revenue well into the 1980s. The firm also added additional owners to its ranks, but this time did not change the letters on the door. DOWL was on an upward trajectory until the late 1980s, when the price of oil tanked and crashed the local economy. In one years’ time, DOWL lost nearly two-thirds of its revenue and a comparable number of employees (from 140 to 40). The firm buckled down and restructured—and it paid off. By 1988, DOWL appointed its second president, Mel Nichols, PE, and a year later, DOWL opened its first office outside of Alaska, in Federal Way, Washington. 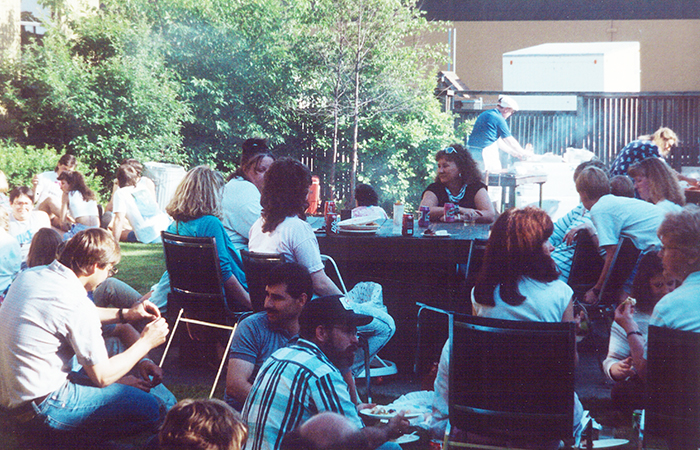 The 1990s started with cautious optimism, but a boom of retail store chain construction began in Anchorage, and DOWL was able to garner a lion’s share of the work. That, along with DOWL’s new corporate structure, which allowed key staff to become minority owners in the company, helped solidify DOWL’s resilience in the market. By 1992, DOWL had nearly rebounded with $8 million in revenue and about 80 employees. To close the decade, DOWL made yet another large change in its ownership: In 1999, NANA Development Corporation (one of Alaska’s 13 Native Corporations) became a 51% owner of DOWL. 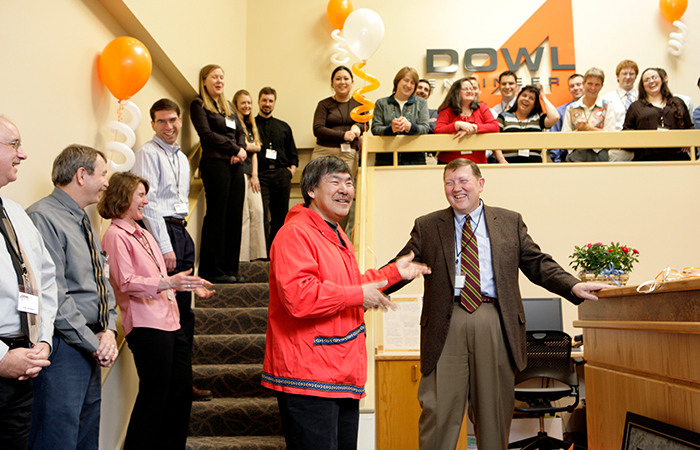 Like everyone, DOWL made it through Y2K without a hitch and began the decade with its third (and current) president, Stewart Osgood, PE. By 2002, DOWL was at $17 million in revenue and 173 employees. That same year, DOWL moved even farther outside of Alaska by opening an office in Tucson, Arizona. Stewart and the rest of DOWL’s management focused on diversifying the firm to ensure a more balanced portfolio of public- and private-sector clients. This started with a merger with the Juneau-based firm Toner-Nordling and Associates in 2007, and a year later with Montana- and Wyoming-based firm HKM Engineering. The decade closed with $54 million in revenue and nearly 400 employees. 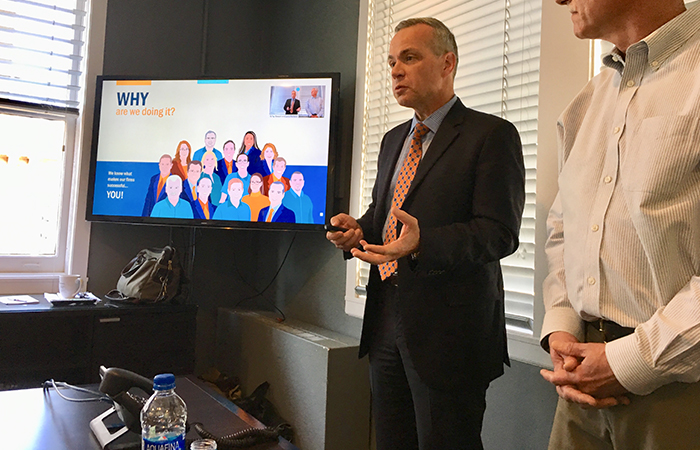 Like most firms, DOWL was set back by the financial crisis in 2009, which lingered into the early ‘10s. However, Alaska’s economy remained relatively strong and more mergers began the decade, first with a firm in Laramie, Wyoming (Aspen-Banner and Associates), and then with a firm out of Montrose, Colorado (Buckhorn Geotech). In 2012, DOWL turned 50 and the minority shareholders purchased back the 51% ownership held by NANA Development Corporation. In 2018, DOWL merged with Oregon-based OBEC, known for services similar to DOWL’s, plus a reputation as regional experts in bridge design. DOWL anticipates that by the close of the decade, the company will reach more than $70 million in revenue and 450 employees working in seven states.

Our CEO and President Stewart Osgood likes to say that if tomorrow was going to be just like today, he wouldn’t be inspired to come to work. It’s this mantra that gives us eyes and a stomach to grow for the sake of new and interesting projects, expanded services, and a broader footprint. DOWL’s employees don’t have to leave the firm to be challenged or given opportunities for professional development and career advancement. DOWL’s planned growth is tempered with a knowledge that we can never take our current clients for granted. It’s this balance that keeps us both grounded and inspired.